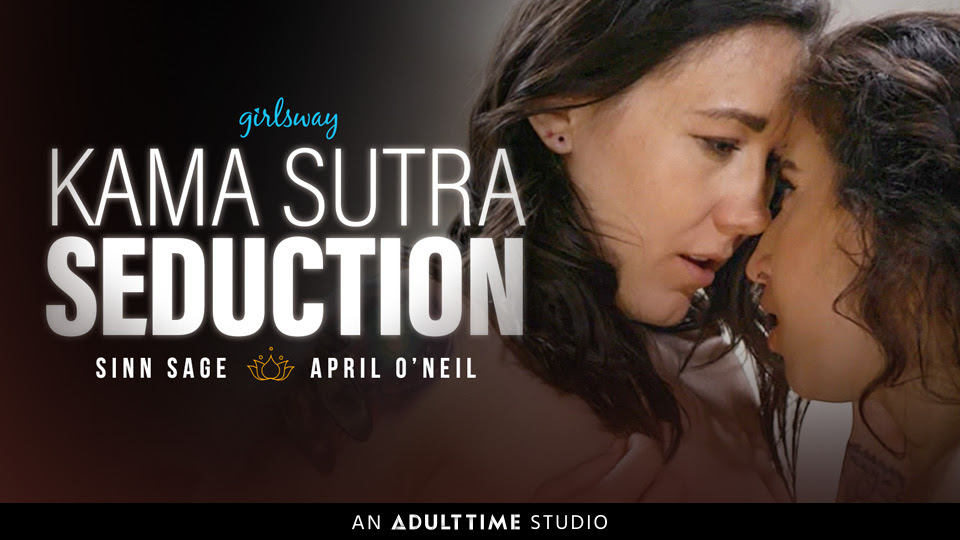 On September 24, O’Neil will be taking the reins of Adult Time’s official Instagram (@adultimecom) to promote her new scene as the host of a live ‘Ask Me Anything’ chat with fans, starting at 2:00pm (PDT)/5:00pm (EDT).
The sparks are flying in this lighthearted comedy about an intrepid reporter (O’Neil) sent to interview Kama Sutra expert (Sage) – a free-floating nudist who is more than willing to share her stimulating secrets about opening up the mind and body and becoming sexually free… with April.
“I hope everyone enjoys watching this scene as much as I enjoyed making it,” said O’Neil of her role. “It was so much fun and passionate! Sinn Sage is truly an incredible woman to be with.”
Kama Sutra Seduction marks O’Neil’s 50th scene for Girlsway; the star, who made her debut for the award-winning lesbian erotica brand in 2014’s Girl’s Got Game, is a longtime fan favorite (and September 2017 Girl of the Month) who also directed a scene for the studio in 2019, Fooling the Probation Officer.
Kama Sutra Seduction is available for download or streaming at Girlsway.com as part of the AdultTime.com network, home to the most extensive catalog of award-winning content – with access to more than 300 channels, 57,000 scenes and 8 new releases per day – all in one subscription.
About Girlsway:
Launched in October 2014, GIRLSWAY is the largest lesbian erotica studio in adult, now including over 1,900 lesbian films and series and 8000+ episodes available on the Adult Time platform. Created by award-winning filmmaker Bree Mills, Girlsway produces original and addictive narrative content that mixes passionate lesbian sex with compelling characters and inter-connected storylines.
About Adult Time:
Launched in 2018, Adult Time is a streaming service exclusively for adults.  Created by award-winning filmmaker Bree Mills, who also serves as Chief Creative Officer, Adult Time is a platform built by fans who believe in a future where mature audiences can safely, securely, and proudly have a place in their lineup for premium adult content.
Dubbed the ‘Netflix of Porn’ by mainstream media outlets, Adult Time offers an extensive catalog of over 280 channels, 56,000 episodes and 8+ new releases per day from some of the most recognized studios, including Girlsway, Pure Taboo, Burning Angel, Fantasy Massage, 21 Sextury, and Vivid Entertainment, alongside exclusive original series, feature films, and much more.
For more information, please visit:
http://www.girlsway.com
http://www.adulttime.com
Follow on Twitter & Instagram:
@girlswaynetwork
@adulttimecom
@thebreemills