Adult Time studio Pure Taboo uncovers the curiosities of forbidden fruit with its first-ever premium bisexual scene, Swapping Sexualities, opening up a new world of possibilities at PureTaboo.com and AdultTime.com on October 7th. 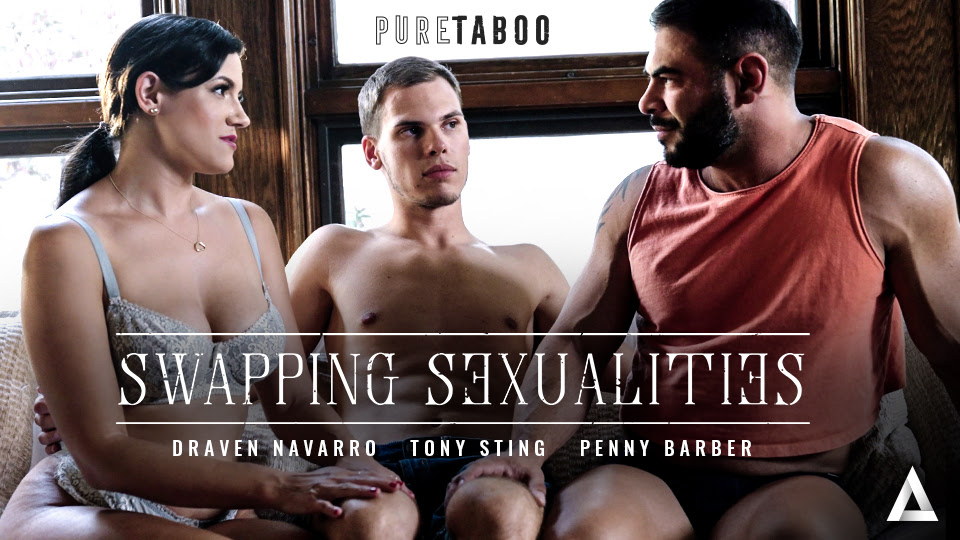 Penny Barber and Draven Navarro star as a freewheeling bisexual couple that invites a naïve young exchange student (Tony Sting) to move in with the horny Canadians to learn about the local customs… and their “special way” of interacting with each other as a family unit!
“We have been slowly working at making Adult Time a fully-inclusive platform, one that offers anything porn fans would like to watch, regardless of their interests or their sexual preferences,” said Frank Stacy, the company’s Director of Marketing. “While we did lesbian episodes of Pure Taboo or some featuring trans models, we had never done a bisexual scene: Swapping Sexualities will be the first one.
“This content is not meant to replace our straight offerings; we are not swapping (no pun intended) a straight episode for a bisexual one, we are offering a bisexual one as a bonus to test the waters. We also have a big project coming up soon that will be our very first fully-inclusive studio – stay tuned!”
Adult Time members can find Swapping Sexualities at PureTaboo.com and AdultTime.com, as well as access the streaming platform’s full library – more than 57,000 premium scenes, 300 channels and 8 new releases per day – of the Adult Time network’s award-winning brands.
About Pure Taboo:
Launched in September 2017, Pure Taboo is the leading taboo erotica studio in adult, including over 200 featurette episodes available on the Adult Time platform.  Created by award-winning filmmaker Bree Mills and promoting the tagline ‘some taboos are meant to be broken’, Pure Taboo features the most popular and up-and-coming performers in adult today, challenging themselves to bring acting and sexual performances in a way viewers have never seen before.
About Adult Time:
Launched in 2018, Adult Time is a streaming service exclusively for adults.  Created by award-winning filmmaker Bree Mills, who also serves as Chief Creative Officer, Adult Time is a platform built by fans who believe in a future where mature audiences can safely, securely, and proudly have a place in their lineup for premium adult content.
Dubbed the ‘Netflix of Porn’ by mainstream media outlets, Adult Time offers an extensive catalog of more than 300 channels, 57,000 episodes and 8 new releases per day from some of the most recognized studios, including Girlsway, Pure Taboo, Burning Angel, Fantasy Massage, 21 Sextury, and Vivid Entertainment, alongside exclusive original series, feature films, and much more.
For more information, please visit:
http://www.puretaboo.com
http://www.adulttime.com
Follow on Twitter & Instagram:
@puretaboocom
@adulttimecom
@thebreemills

Fantasy Massage/All Girl Massage Presents First-Ever Trans Scene, ‘Someone Who Gets It’

Fantasy Massage Series All Girl Massage gets on the table for its first-ever trans scene, ‘Someone Who Gets It’, getting lubed up October 21st at FantasyMassage.com and AdultTime.com. Kate Zoha stars as a woman desperately in need of a massage, but because she’s trans, feels uncomfortable at the prospect of opening up to a therapist about such a […]