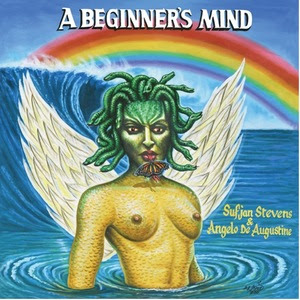 1. Reach Out 3:43
2. Lady Macbeth In Chains 3:42
3. Back To Oz 4:25
4. The Pillar Of Souls 4:04
5. You Give Death A Bad Name 5:11
6. Beginner’s Mind 2:36
7. Olympus 3:07
8. Murder And Crime 3:43
9. (This Is) The Thing 3:13
10. It’s Your Own Body And Mind 2:27
11. Lost In The World 3:20
12. Fictional California 3:03
13. Cimmerian Shade 5:01
14. Lacrimae 2:05
A Beginner’s Mind
September 8, 2021—Sufjan Stevens and Angelo De Augustine debut two new songs from their forthcoming collaborative album A Beginner’s Mind today: “Cimmerian Shade,” inspired by Silence of the Lambs, and “You Give Death A Bad Name,” inspired by Night of the Living Dead. Stream/share the tracks here. A Beginner’s Mind is out September 24 on Asthmatic Kitty Records, re-order/pre-save here.
Of “Cimmerian Shade,” which is sung from the perspective of Silence of the Lambs antagonist Buffalo Bill (a.k.a. Jame Gumb), Angelo muses, “Many authors have emotional attachments to the characters they create. But in this instance, I was interested in how a character felt about being created. In my imagination I was giving consciousness to someone else’s creation. The song is essentially a dialogue between creation and creator that seeks to find understanding to some of the same questions that we ask ourselves about existence, free will, fate, purpose, guidance and if anyone or anything out there is listening or cares.”
A Beginner’s Mind’s 14 songs are inspired by films Sufjan and Angelo watched while writing together for a month at a friend’s cabin in upstate New York. Choosing a movie to unwind after each day’s work, they soon began finding inspiration in their nightly entertainment, using the Zen Buddhist concept of shoshin (literally “a beginner’s mind”), the I-Ching and Brian Eno’s Oblique Strategies as guiding principles. The new tracks follow “Back To Oz,” “Fictional California,” “Reach Out” and “Olympus.”
Pre-order special colored edition vinyl, other formats, and related merch including a 7-inch of “Reach Out” and “Olympus” at https://akrec.co/abm-preorder
Sufjan Stevens is an artist, songwriter and composer living in New York. He has released nine widely lauded studio albums and a number of collaborations with fellow musicians, choreographers and visual artists from the New York City Ballet and the celebrated director Luca Guadagnino to his stepfather Lowell Brams and noted dancer Jalaiah Harmon.
Angelo De Augustine is an artist and songwriter living in Thousand Oaks, California—a suburb north of Los Angeles, where he grew up. He has released three albums including his self-released debut, Spirals of Silence (2014), and two for Asthmatic Kitty Records, Swim Inside The Moon (2017) and Tomb (2019).
Sufjan Stevens / Bandcamp / Instagram
Angelo De Augustine / Bandcamp / Instagram / Twitter / Facebook

“MERCY MUSIC KEEP THE FIGHT ALIVE WITH ANTHEMIC PUNK ROCK”- The Noise Las Vegas punks, Mercy Music have announced “MELODY AND TRUTH” a 13-track retrospective LP of the band’s catalog. 13 of the best tracks pulled from the band’s three LPs, as selected by Adam Bomb from The Faction. Pressed on Deluxe foil-stamped gatefold cover on 180-gram […]