The 2000 romantic dramedy High Fidelity is one of the most celebrated of the genre, and now Hulu’s series adaptation is hitting the streaming service on Valentine’s Day. The first High Fidelity teaser for the Zoe Kravitz-led series has arrived, exploring the highs and lows of the New York dating and music scenes. Check out the trailer below!

The High Fidelity series has been ordered for 10 episodes and will tell the story from a female point of view, with Kravitz playing the lead (played by John Cusack in the 2000 feature film) as the ultimate music fan and record store owner who is obsessed with pop culture and top five lists. 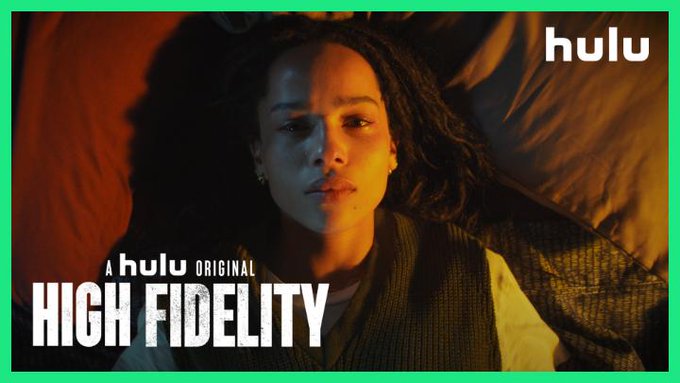 Jake Lacy is set to portray Clyde, an NY transplant from LA who tends to be the coolest guy in the room but is still struggling to find his place in the city and despite his lack of interest in music, he reveals an open and funny side that intrigues Kravitz’s Rob.

Following Disney’s acquisition of Fox assets, which included a 60% controlling stake in Hulu, Disney decided to move the series from the more family-friendly Disney+ brand to the adult-oriented Hulu. High Fidelity is being written by Veronica West and Sarah Kucserka and comes from Midnight Radio and ABC Signature.

“The entire High Fidelity team is absolutely ecstatic about our move to Hulu and incredibly grateful to ABC Signature and Disney+ for being so supportive of the transition,” Midnight Radio said in a previous statement. “Once Zoe came onboard and the show began to evolve, it quickly became clear we may be best suited for a different home. Everyone involved locked arms to help make this shift to Hulu, which is the perfect platform to reinvent this beloved timeless property.”

West and Kucserka developed the series for television and will also serve as executive producers alongside Scott Rosenberg, who co-wrote the 2000 movie. Josh Appelbaum, Andre Nemec, Jeff Pinkner, and Nick Hornby will also executive produce with Jesse Peretz executive producing and directing the pilot. Adrienne Erickson will produce for Midnight Radio.