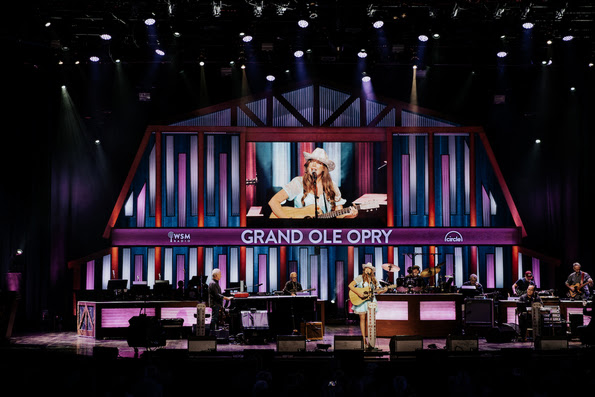 photo credit: Mackenzie Ryan
Acclaimed singer, songwriter and musician Kaitlin Butts made her Grand Ole Opry debut this past Saturday performing her songs “blood” and “jackson” as well as a special rendition of “Whiskey Lullaby” with her husband, Cleto Cordero.
Of the milestone, Butts shares,
“I have sung in dive bars, county fairs, appliance stores, living rooms, theaters, stadiums, rodeos, on top of truck beds, in front of 2 people and in front of 20,000 people, but no stage will ever be as grand as the Grand Ole Opry stage. I feel so privileged to have the opportunity to sing on a stage where so many of the people in country music, who I feel like raised me, have stood before. Last year, my husband got to play the Opry with his band and at the end of the night, he looked at me and said ‘Just you wait. That’s gonna be you someday.’ And I’m not going to lie, I was frustrated when he said that and I said “Cleto, do not put that unrealistic, unachievable idea in my head. That may never happen for me and I’m okay with that.’ The Opry felt untouchable to me, like it was for people who really had it going on and they had a big fancy label, a manager with a 10-gallon hat and a private jet. I am rarely the first to admit when I am wrong, but Cleto, I was wrong.
I got invited to play the Grand Ole Opry stage while I was standing in the flower section at the east side Kroger. I may not have any of those things that I thought you had to have to get to play the Opry, I have something better. I have so many people around me who believe in me and that encourage me to do things that I never thought were possible for myself.”
The performance adds to a breakthrough year for Butts, who released her widely acclaimed new album, What Else Can She Do, this past spring. Produced by Oran Thornton (Angaleena Presley, Logan Brill) and recorded at Nashville’s Sound Emporium Studios, What Else Can She Do tells the stories of women—those who are lost, struggling, angry and scared, but who remain resilient through it all.
Additionally, following the release, Butts unveiled her new acoustic series, Sad Yeehaw Sessions, last week, which consists of six stripped-down performances: “Angels Like You,” “Hold You Down,” “One More Girl,” “Blood (Stripped)” and “Whiskey Lullaby” feat. Cordero. Listen/share HERE.
Critical acclaim for What Else Can She Do:
“she ties it together really really beautifully…I love the way the record taps into these themes of resilience and grace and strength under fire”—NPR Music
“makes a strong case that she ought to be positioned somewhere between Miranda Lambert or Kacey Musgraves at country’s vanguard—an Oklahoma native with a big, malleable voice and the songwriting skills to match…such an exciting talent”—Rolling Stone
“highlights her voice at its most powerful and chilling”—Billboard
“one of the best albums to come out of Nashville so far this year…she sets herself up to be the genre’s next breakout star, sure to astound audiences with her brilliant storytelling and a voice to match”—No Depression
“a strong, unique voice that cuts right through the crowded field of singer/songwriters trying to achieve something similar. She knows how to write songs that honor the influence of the classics but sound entirely modern, and these are powerful, emotional songs”
—Brooklyn Vegan
“as clear of a successful crossover from Red Dirt to Nashville as early Kacey Musgraves or Miranda Lambert”—The Boot
“combines these tough-luck fighters, her admirably big voice, and a bit of outside-the-box musicianship to give us one of the best country records of the year”—Americana Highways
“heartwrenching”—Wide Open Country
“Butts has an easy, unaffected vocal delivery…but her fixation on the messier side of heartache…and her unwavering traditionalist bent trumps any overt pop aspirations”—Magnet
“this album is sure to be one of the best of the year…a country music powerhouse with vocals equally as compelling as her songwriting is impressive”—Whiskey Riff
In celebration of the music, Butts will continue to tour throughout next year including several dates supporting Morgan Wade at New York’s Bowery Ballroom, Nashville’s Ryman Auditorium, Boston’s Royale, Philadelphia’s World Café Live, Santa Barbara’s Lobero Theatre, Houston’s Heights Theatre, Austin’s Scoot Inn and Dallas’ Kessler Theater among many others. See below for complete itinerary.
What Else Can She Do is Butts’ second full-length studio album following her 2015 debut, Same Hell, Different Devil. Since her debut, Butts has gone on to release several diverse singles including 2019’s “White River” and 2021’s “Marfa Lights” and “How Lucky Am I.” Continuing to receive widespread attention, Wide Open Country proclaims, “Even with a playful innocence persona, Butts’ songwriting is brimming with effective wit and tact. With the charisma of Kacey Musgraves or an early Lee Ann Womack, Butts has that rare combination of style and substance,” while Whiskey Riff declares, “Kaitlin Butts is absolutely a name you need to know.”
Raised in Tulsa and now based in Nashville, Butts has continued to tour relentlessly across the country, building a passionate grassroots fanbase as she went. In addition to multiple headline shows, she has performed alongside artists such as Turnpike Troubadours, Flatland Cavalry and Parker McCollum.
KAITLIN BUTTS CONFIRMED TOUR DATES
November 11—Helotes, TX—Floore’s Country Store*
December 9—Fort Worth, TX—Billy Bob’s
January8-10—Steamboat Springs, CO—The MusicFest at Steamboat
March 1—New York, NY—Bowery Ballroom+
March 2—Boston, MA—Royale+
March 3—Philadelphia, PA—World Café Live+
March 4—Cleveland, OH—Agora Theater & Ballroom+
March 5—Detroit, MI—El Club+
March 25—Santa Barbara, CA—Lobero Theatre+
March 26—Phoenix, AZ—Crescent Ballroom+
March 28—Santa Fe, NM—Meow Wolf+
March 30—Houston, TX—Heights Theater+
March 31—Austin, TX—Scoot Inn+
April 1—Dallas, TX—Kessler Theater+
April 2—Austin, TX—Scoot Inn+
April 6—Nashville, TN—Ryman Auditorium+
April 8—Atlanta, GA—Tabernacle+
April 16—Georgetown, TX—Two Step Inn
April 30—Indio, CA—Stagecoach
May 19—Knoxville, TN—River Breeze Event Center^
*supporting Wade Bowen
+supporting Morgan Wade
^supporting Paul Cauthen