TANK AND THE BANGAS RETURN WITH NEW SONG “OUTSIDE” 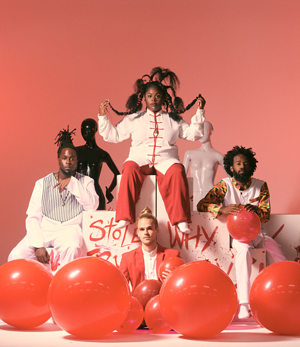 “Outside,” the new track from Best New Artist Grammy nominees Tank and The Bangas, is out now on Verve Records. Of the song, frontwoman Tarriona “Tank” Ball says, “I think everybody is feeling that excitement and anxiousness about concerts and festivals coming back again. That’s what ‘Outside’ is all about for live show lovers like us, who live for the energy we get from the people. We’re excited to share this song with you and can’t wait until the world is singing back to us, ‘We outside.’” Listen to/share the song HERE.

In conjunction, the band continues to take their lauded live show on the road this year, including a residency at New York’s Blue Note Jazz Club this November as well as appearances at Roots N Blues Festival, Indy Jazz Fest, Mempho Music Festival and more. Full tour routing can be found below.

Earlier this year, the group released their third studio album, Red Balloon, to widespread praise. Predominantly produced by Tank and the Bangas, the 16-track album includes contributions from Alex Isley, Masego, Lalah Hathaway, Jacob Collier, Questlove, Big Freedia, Trombone Shorty, Jamison Ross, The Hamiltones, Georgia Anne Muldrow and Wayne Brady. The new work has evolved and pushes the band to a new level, shedding light on their unique observations and songwriting reflecting on the ills of America while also celebrating the beauty of Black life.

Throughout their career the group has performed on “The Tonight Show Starring Jimmy Fallon,” “Austin City Limits” and “TODAY.” Tank and The Bangas have toured non-stop, selling out venues both stateside and abroad including festival appearances at Coachella, Glastonbury, Bonnaroo and the Newport Jazz Festival.

See what the media says about the new record:

Listen to NPR 1A HERE

“The range of Tank and a band is just simply wonderful. They deserve all the accolades and more for this release.”—NPR Music

“Soul is more than a one-track monolith, as heard with Tank and The Bangas’ Red Balloon. The jazzy, funk-influenced, soothing elements of this LP leave one ready to reflect and bask in the various takeaways revealed throughout.”—Vibe

“Like the New Orleans-based group themselves, Red Balloon brazenly blossoms into a rambunctious, free-flowing celebration that dives soul first into a heady nu-funk groove…. At one with otherness and living-in-the-moment-centric, the quirky quintet enters its most artistically unified era with gusto.”—Bust Magazine

“The album has an instantly recognizable freedom to it, a collaborative pulse and lighthearted strokes of genius that help alleviate even the darkest corners of the songs.”—Under The Radar