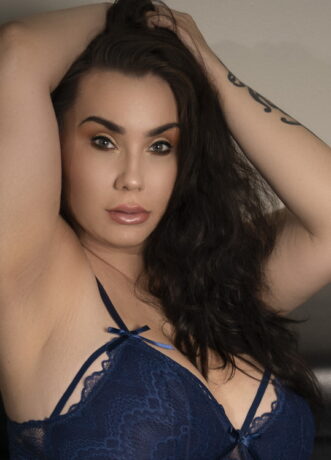 Inspired by Romi Chase who reached out to Falzone about her worries with appearing publicly at conventions due to a past physical assault, this feature includes reports of bad fan behavior by Romi and fellow adult entertainers, Kendra Sunderland, September Reign, Marcela Alonso and Gigi Dior, as well as an interview with Dan Davis the creator of popular lifestyle convention, the Exxxotica Expo.

Dressed in a mini-skirt and fishnet stockings, Chase stood for more than a few images with the fan. “And at some point we did this pose where he is facing the camera and he put his hands around my waist,” recalled the adult performer, whose legal name The Daily Beast is withholding out of privacy concerns. “My back was turned toward the camera, kind of like a butt shot, and then out of nowhere he proceeded to put his hands in my butt, like, underneath my skirt.”

“Hearing anything about alleged incidents from anyone who has attended EXXXOTICA such as these encounters is obviously alarming to us, and it is something we take very seriously,” said Dan Davis, director of operations of Three Expo Events, which produces EXXXOTICA, in a statement to The Daily Beast. “The alarming behavior of the few definitely casts a dark shadow on the industry as a whole. These ‘fans’ have to realize that these women are people. They are someone’s daughter, wife, girlfriend and human beings who deserve respect.”

In addition to outlining clear codes of conduct, most expos do provide security guards. Adult content creator Marcela Alonso told The Daily Beast that at the same Chantilly-based EXXXOTICA event in 2022, a fan came into her booth and began to physically assault her. “I had to scream and yell,” she said. “EXXXOTICA security kicked him out.”

You may read the artcicle in it’s entirety here https://www.thedailybeast.com/porn-stars-to-creepy-fans-were-human-not-just-fck-toys?ref=author&fbclid=IwAR0rRnVa3VUc9e4nXvihutfTePsY_NKB5bJT79dnG_LGEph9GJmKoNC3oGg