The Sexiest Awards of the Year Celebrates its 40th Anniversary in Las Vegas on Saturday January 7, 2023
AVN Media Network has done it again! Two-time Grammy® nominee Kehlani, is set to perform at the 2023 AVN Awards. It will be the first time in AVN Awards’ history that two fierce female performers will hit the stage. Kehlani’s work has been critically-acclaimed and her 2020 album graced over a dozen year-end lists from Billboard, Nylon, Spin and many more. Billboard’s Women in Music recognized her with their Rulebreaker Award, given to female artists who use their music and platform to defy traditional industry expectations and advance a powerful message for young people. Her third album, Blue Water Road, was released earlier this year. The AVN Awards, the sexiest awards show of the year, is celebrating 40 years in the business and will take place on January 7, 2023. AVN president Tony Rios made today’s announcement. 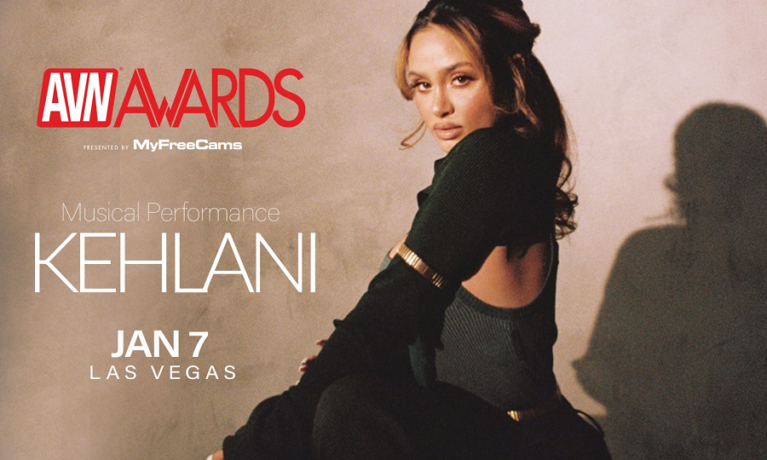 “We are honored to have Kehlani set to perform at the iconic AVN Awards Show this January,” commented Rios.  “She is an incredible addition to this year’s show and I know our audience will be amazed by her performance.”
Kehlani will open your eyes, open your mind, and open your heart. For as blunt as she may be about life, longing, lust, and love, her music occupies an elevated state above even the best high—yet accessible by simply listening. The Bay Area-born two-time GRAMMY® Award-nominated multiplatinum songstress unlocks this place anytime she picks up a pen or grabs a microphone. Since 2014, her light has only continued to glow brighter. Thus far, she has picked up over twenty gold and platinum RIAA certifications, tallied 5 billion streams, and garnered a pair of GRAMMY® Award nominations in the categories of “Best Urban Contemporary Album” for the gold-certified mixtape You Should Be Here and “Best R&B Performance” for the platinum single “Distraction.” Beyond blockbuster collaborations with Cardi B, Justin Bieber, Post Malone, Kiana Ledé, Teyana Taylor, and Kyle, she has appeared on soundtracks such as Suicide Squad: The Album, The Fate of the Furious: The Album, and more. Along the way, she received the “Rule Breaker Award” from Billboard Women In Music and performed at Voodoo Music + More, Coachella, and beyond. She reached a critical and creative high watermark with her sophomore offering, It Was Good Until It Wasn’t. It not only bowed at #2 on the Billboard Top 200, but it also concluded 2020 on over a dozen year-end lists from Billboard, Esquire, Hypebeast, Nylon, Seventeen, Spin, Stereogum, The Guardian, and many more. Now, she welcomes everyone into the rapture of her third full-length album, Blue Water Road [Atlantic Records].
The 2023 AVN Awards will be hosted by adult stars Abella Danger and Reya Sunshine on January 7, 2023, as part of the AVN Adult Entertainment Expo scheduled January 4-7 in Las Vegas. Both the 2023 AVN Awards and the AVN Adult Entertainment Expo are presented by MyFreeCams.
Tickets are now available by clicking here AVNAwards.Com
For hotel reservations and accommodations, click here to check out hotel availability
Fan voting for the 2023 AVN Awards Fan Voted Categories begins in November and continues until January. For more information about the Awards and the Fan Vote, visit AVNAwards.com.