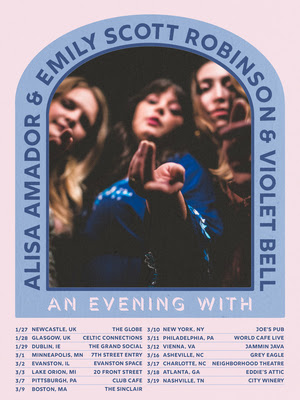 Acclaimed singer, songwriter and musician Emily Scott Robinson will embark on a special tour next year with Alisa Amador and Violet Bell in celebration of her new release, Built On Bones, a song cycle for the Witches of Shakespeare’s Macbeth. In addition to the trio performing the project in its entirety, each of the artists will also perform a selection of their own songs individually.
The upcoming tour includes stops at Minneapolis’ 7th Street Entry, Pittsburgh’s Club Café, Boston’s Sinclair, New York’s Joe’s Pub, Philadelphia’s World Café Live, Vienna’s Jammin’ Java, Atlanta’s Eddie’s Attic and Nashville’s City Winery among others. See below for complete itinerary. Tickets go on-sale this Friday, November 4 at 10:00am local time, full details can be found at www.emilyscottrobinson.com/tour.
Released last week via Oh Boy Records (stream/purchase here), Built On Bones was originally commissioned for the Telluride Theatre and first came to life on stage with Robinson directing the music and performing in the role of Hecate. Following a profuse fan response, Robinson joined forces with producer Brandy Zdan as well as Amador and Lizzy Ross (of Violet Bell) to record these modernized adaptations.
Critical acclaim for Built On Bones:
“Emily Scott Robinson’s music succeeds as a note-perfect study of the emotional state of the human condition because she’s equally as empathetic as she is emotive…plaintive yet powerful songs”—The Tennessean
“stunning…Emily, Alisa, and Lizzy’s harmonies are truly spectacular”—Brooklyn Vegan
“excellent…boundary-expanding work”—Nashville Scene
“Robinson may not be able to rewrite this history, but her reframing of it feels like its own kind of healing potion for this current moment in which women continue to be oppressed”
—No Depression
“an ambitious new project…stunning, mystical”—The Boot
“Robinson is a master at creating that haunting southern gothic atmosphere”—Whiskey Riff
“Together the three vocalist’s voices melt into one, further advancing the project’s spine-chilling sensation”—Wide Open Country
Reflecting on the project, Robinson shares, “In the spring of 2021, I was asked by my friend and theatre director Colin Sullivan to compose music for Shakespeare’s Macbeth. The Witches of MacBeth are traditionally cast as scary, ugly and evil creatures to which we attribute the darker magic of the show and Macbeth’s descent into madness. Our theory was this: What if the Witches were instead beautiful, tempting, sexy, powerful and playful? What if the Witches held the capacity, just like Macbeth, for both light and dark magic? After all, in the time of King James I and the witch trials in England, the ‘witches’ targeted by the Crown were not supernatural beings—they were folk healers, spiritualists and teachers. We envisioned a version of the show where we gave the Witches a powerful voice, and in doing so, belied the history of violence against women and their magic. In making this record, Lizzy, Alisa, Brandy and I held in our hearts the intention to heal the lineage of women who came before us and declare that our power and magic cannot be controlled or snuffed out by a violent patriarchy of fearful men.”
In addition to Robinson (vocals, guitar), Amador (vocals) and Violet Bell (vocals), Built on Bones also features Ellen Angelico (electric guitar, baritone guitar), Josh Grange (pedal steel, piano, electric guitar), Aaron Haynes (drums), Vanessa McGowan (bass), Eamon McLoughlin (fiddle), Teddy Morgan (bass), Kaitlyn Raitz (cello) and Kristin Weber (violin, string arrangements). 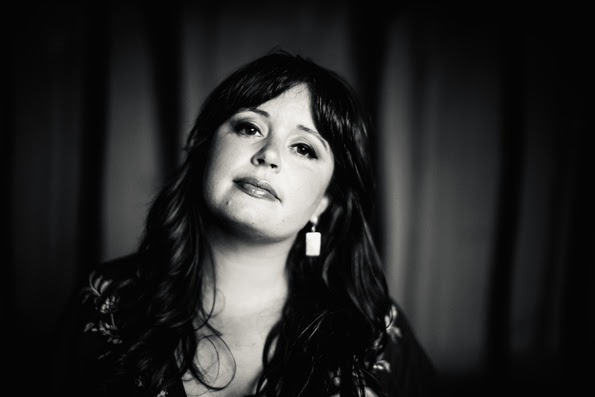