Rising starlet Nicole Doshi is officially an AVN Award winner for 2023, taking home the esteemed trophy in the category of ‘Best Foursome/Orgy Scene” for her high-powered performance in Blacked Raw title High Gear.
The petite Chinese sexpot, who received her first AVN Award nominations this year after only a year in the business – she also earned a nomination for Best New Starlet – is over the moon about her first industry win. 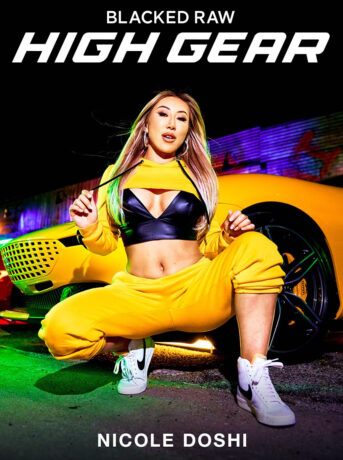 “As a new performer in the industry, I wasn’t expecting too much and was thrilled to just be nominated because I didn’t anticipate receiving any sort of award nomination or win at this point in my career,” said Doshi. “So it was amazing to even be considered for a trophy. What a surprise and an honor… I am so happy that this particular scene got so much attention.”
The 18-person orgy, a wild free-for-all party co-starring Violet Myers, Vicki Chase, Vic Marie, Vanna Bardot, Savannah Bond, Richard Mann, Isiah Maxwell, Jonathan Jordan, Brickzilla, Garland, Jamie Knoxx, Jay, John Legendary, Tyrone Love, Stretch, Zaddy and Anton Harden, was one of her favorite scenes to shoot so far in her career.
“I didn’t know what to expect, but I just win and decided to have fun and that’s exactly what we did,” she adds. “I want to thank my High Gear co-stars and of course AVN for giving us the award to commemorate such an incredible scene. And also to Derek Dozer for making it all happen – like magic!”
Nicole Doshi is available for booking through Motley Models. Find her Model Page here.

Nicole Doshi is living her American Dream: the Chinese-born model, influencer, content creator and rising adult film starlet from the port city of Qingdao came to the United States in 2013 as a college student in Nebraska, but her big city aspirations led her to a one-way ticket to New York City, where she “fell in love with the atmosphere and speed of the city”.

From there, Doshi parlayed her natural beauty, abilities and bubbly personality into creating sexy content and premium videos for platforms such as OnlyFans, but was banned for holding raffles to hook up with fans, posting public nudity and “engaging in sex with non-sexual objects”. Becoming an adult film star, she reasoned, was the next logical step in the progression of her career.

Oliver Wong Is Ready for a One Night Stand of the Comedy Kind This Thursday https://emmnetwork.com/oliver-wong-is-ready-for-a-one-night-stand-of-the-comedy-kind-this-thursday/